Thank you all for your support. 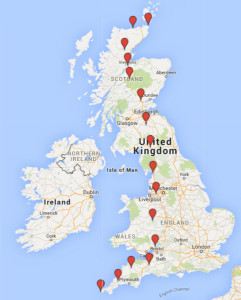 I need to do more things that challenge me.

We have some great friends and work colleagues. Thank you.

I really want to get a dog (when conditions allow).

It rains in Scotland.

I have almost everything I want in life (with only 3 exceptions, one of which is a dog), and for that I’m very grateful.

Thank you all so much for your support through the 2 weeks, it meant a lot.

I’ll be posting the final route in the next few days for anyone that’s interested.

Getting up early, we had some breakfast and set off on another grey, damp Scottish morning with the finish a mere 40 miles away.

Despite the rain and some head wind we made good progress, in a weird way I’m glad it had some tough bits as I think it would have felt an anticlimax if it’d been too easy.

A snack stop at Thurso and we pushed on for the finish.

Getting to John o’groats by 1145 we had plenty of time to sign the end-to-enders book, have an ice cream, change, drop our bikes at the courier point and get the bus to Inverness.

But what should have been the end, took a sad turn. There was a 4 car crash just ahead of the bus where a lady lost her life on the road ahead. After a long delay the bus driver heard from control that he was to take people back to Thurso as the road would be closed for 8 hours at least.

After a bit of googling, team work with a nice Scots gent and agreement from all the passengers the bus driver agreed to try and get us to the last train from Wick at 4.

By some magic we all made the last train and should make Inverness by 8.

On the plus side, the train has a toilet and a trolley, we’ll have to wait to get food till a lot later than expected but that’s ok.

Strange end to the final day.