Starting at a slightly damp Invershin, we made our way past the shin falls, didn’t see any salmon leaping but did see a lot of fishermen hoping to catch them. 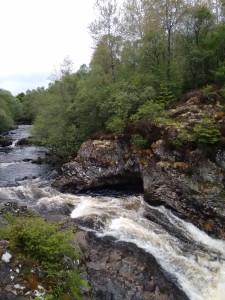 A long slow climb for the first part of the morning into the empty highlands, quite grey again with patches of rain that came and went, plus the odd section into the wind.

This section was the first really remote part on this trip, although we’ve been higher we were never that far from people.

It would have been one of my favourite days, head winds and persistent rain took some of the fun off though.

Lunch at Altnaharra by Loch Naver was nice, although Chris was dinner for some of the flying wildlife. 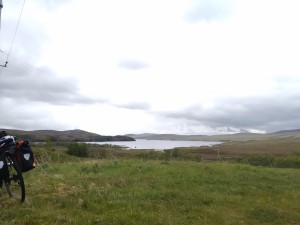 I think this was also the first time it really sank in how far we’ve come, especially when we got to the North Sea.

Now we’re at Melvich with just 39 miles to go…

(having had a good meal at the Halladale Inn)